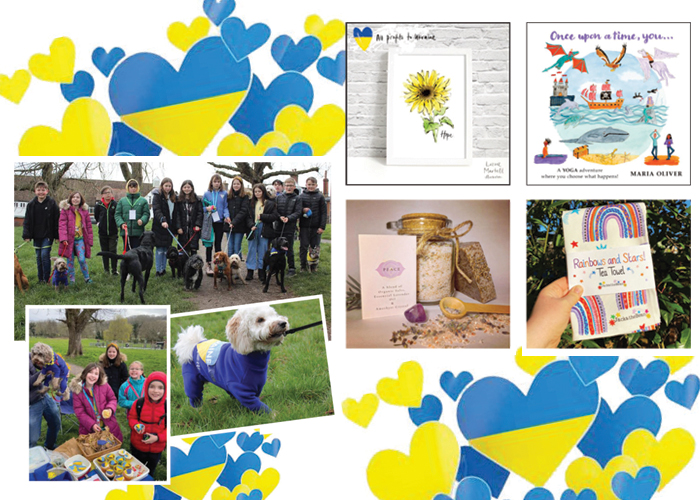 It’s quite humbling to see the families fleeing war-torn Ukraine with just a few bags of personal belongings travelling miles into an unknown future. Many are women with children and many also took their beloved pets – not being able to bear leaving them behind, helpless, in a war zone. It was images like this which inspired a group of Boxmoor families to get together for a sponsored dog walk to show solidarity and raise money for Ukraine.

On Sunday 13th March over 40 people turned up, many wearing Ukrainian colours, for the walk around Boxmoor Common raising over £1,700 for DEC /Action Aid. Many locals, including Lib Dem Cllr William Allen, stopped by to show support and over £400 was made on the day from donations for cupcakes, dog treats, key rings, dog scarves and bows all made by the children.

One of the mums involved commented; ‘My son said he wanted to do something to help Ukraine. Of course you can give money and the school is collecting donations, but it meant a lot to the kids to be doing something pro-active themselves so we came up with the dog walk idea. Friends, families and supporters have been incredibly generous especially when many have donated so much already.’

The Raffle that Kept on Growing

At the end of February, when we were all reeling in shock at what was happening in Ukraine, I had the idea of raising money for the Red Cross and Disasters Emergency Committee. I’ve donated prizes to Virtual Raffles in the past and thought I could do something quick, small and Boxmoor-based with some of the small business owners I know. I hoped I’d raise as much as £500.

What started small quickly snowballed. Within two days I’d already exceeded my fundraising target. Then the offers of more prizes started to roll in…

The prizes included prints and paintings from artists, sessions with fitness instructors, vouchers, wine, plants, books, toiletries… all created and donated by local small businesses who wanted to help.

I’ve been totally bowled over by the response to my little fundraising idea. The full list of businesses is too big to fit in this article, but you can see them at www.boxmooryoga.co.uk/blog Please show your thanks by supporting them – the last two years has been difficult for the self-employed but they didn’t hesitate to help.