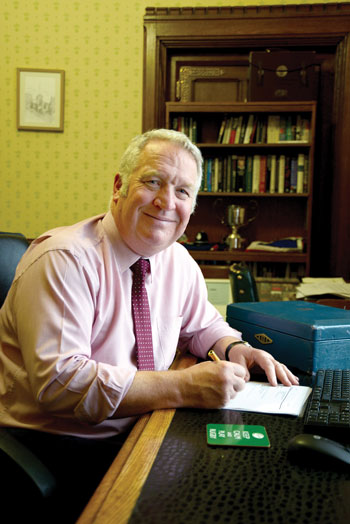 At time of writing we are at a critical point in the battle against the covid-19 pandemic with more areas being put under tighter restrictions to prevent the infection rate getting spiralling out of control.

The EU trade talks are similarly at a critical moment. I am still hopeful that after 40 years of membership, and living under the same rules, we will leave with a deal.

However, I know that writing a few weeks in advance of publication it would be unwise for me to comment on either of these issues.

Locally, top of the agenda is hospital services in west Herts. At a recent online meeting, the West Herts Hospitals NHS Trust announced they are going to redevelop the Watford General site. They have steadfastly refused to consider a new hospital on a new site. This meeting was nothing short of a pantomime, frankly. A succession of pre-determined speakers lined up to spout the official line and praise the Trust’s decision to upgrade Watford.

We are still fighting this. We have a judicial review and I have brought in the National Audit Office to look at the decision. The Trust has an obligation to make sure that all options are considered. They cannot manipulate the data to ensure a pre-determined solution wins out – yet this is exactly what they have done. I am pleased to say the National Audit Office are investigating.

The Trust need to look at the bigger picture. If it costs a two-year delay, and I don’t believe it needs to, it would be worth it if we get a new centralised hospital to serve all three major urban areas.

Both St Albans and Hemel Hempstead are earmarked for expansion with large new housing areas already proposed. To keep the hospital located in a tangle of Victorian backstreets in Watford, right next door to a major football stadium, is ridiculous.

I do understand that people in Watford are worried about losing their hospital, but a new site would give us a 21st Century hospital for the whole local community it serves.

The benefits of a new site that is easily accessible for all three towns, with room for level car parking and expansion far outweighs the rush to be included in the first tranche of new hospitals.

This is a once-in-a-lifetime decision. We must get this right for all the people of West Hertfordshire. Let’s not get this wrong again.