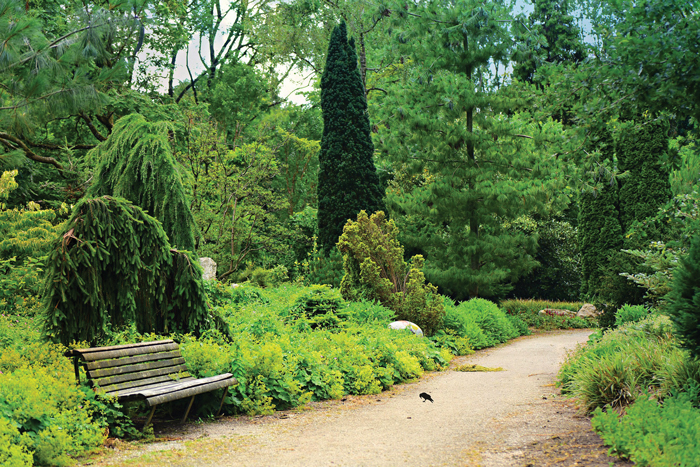 If there’s one particular group of plants that people love to despise, it tends to be conifers. Could it be that many of us dismiss the huge variety among conifers with just one word – leylandii? The Leyland cypress, Cupressocyparis leylandii, seems to fire up a lot of hatred. It is believed that there could be around 55 million of these trees within the UK – that’s more than one for every adult. The problem is all about size. The trees can grow up to 90cm per year and people have a habit of planting them inappropriately, then failing to keep them under control.

The citrus-scented foliage of leylandii actually makes a magnificent, dense hedge, which acts as a perfect screen or windbreak. It also provides noise reduction, which can be very valuable for those living next to a main road. When clipped regularly, it’s a perfect garden friend. But nobody knows exactly how tall the tree can grow because there are no ancient leylandii, though estimates suggest they could reach heights of 61 metres (200ft) or even more. These are relatively new plants that originated from a cross created in the late nineteenth century in Wales. The parent species are the Monterey cypress and the Nootka cypress, both from the USA. One parent brings its hardiness to the mix, whilst the other provides a pretty amazing growth rate. The tree is unable to reproduce without human help and all existing leylandii therefore come from cuttings.

Whilst legal disputes involving neighbours and leylandii run into thousands, others celebrate the beauty and grandeur of a rather spectacular tree, which can take pride of place in a suitable setting. It grows into an impressive specimen and also plays host to many birds and other wildlife. Indeed, the National Pinetum in Bedgebury, Kent, is rightly proud of what is believed to be the tallest and oldest leylandii hedge in Britain, measuring over 40 metres.

Conifers possess many charms that should never be overlooked. These cone-bearing trees are hugely diverse and they hold impressive carbon-capturing statistics. The largest tree in the world, measured by volume, is a giant sequoia, Sequoiadendron giganteum, in California, measuring 83m tall with a diameter of 11m at the base. It is considered to be middle-aged, being around 2,000 years old. The magnificent cedar of Lebanon, Cedrus libani, can easily grow to 35m high and almost as wide. This is the oldest cedar of all and there are some situated on the slopes of Mount Lebanon that are said to be 2,500 years old.

At the other end of the scale, many miniature conifers will not reach even 100cm tall at maturity. Pinus mugo is the dwarf mountain pine and it sits comfortably within a mixed border or can even be grown in a large pot. There are hundreds of different shapes, colours, contrasting textures and forms of conifers that can provide colour and interest throughout the year. The pencil-slim Italian cypress is widely used in Mediterranean-style gardens here in the UK, creating vertical impact and drama all year round. In contrast, prostrate, spreading junipers, such as Juniperus horizontalis, provide excellent ground cover and colour-changing foliage from summer through to winter.

Juniperus is known for its dark berry-like cones, which can be used in food dishes such as casseroles and stuffing. They are also the main flavouring for gin. However, the red, fleshy berries produced by Taxus baccata, the English yew, are highly toxic.

Some conifers, such as yew, respond extremely well to clipping, whilst others, including leylandii, go brown and won’t re-grow if you cut back into old wood.

Not all conifers are evergreen. The beautiful, native larch tree loses its soft, needle-shaped leaves in winter. Others change colour throughout the seasons, including Cryptomeria japonica which is coloured blue-green in spring, turns green during summer and rusty-red in winter. This conifer has soft, tactile foliage, whereas the monkey puzzle tree, Araucaria araucana, has sharp foliage that can cut like a razor blade.

The dwarf conifer beds of the 1970s era have now been largely usurped by more naturalistic planting. Island beds filled with rocks and conifers fell out of fashion during the late 1980s, although there are still examples to be found in public parks and larger estate gardens. Conifers are, however, back! They can be used with spectacular success as specimens and can be blended within planting schemes to bring year-round colour and interest. Never underestimate this amazing family of trees – there is something suitable to lend a touch of unique magic to any outdoor space.