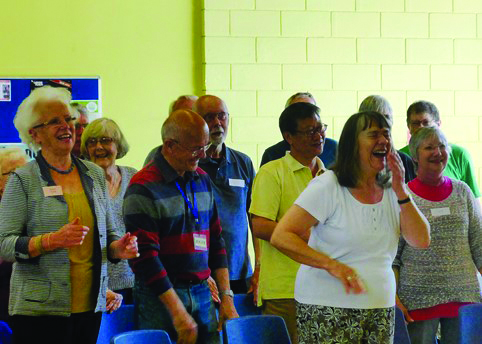 DCC 'Come and Sing' 16.5.15. Roger is in the striped jumper, flummoxed by trying to clap and stamp at the same time.

(music by Allan E Naplan, b.1972) is a lyrical setting of an essential maxim from Jewish morality laws, translated to mean:

‘The world is sustained by three things: by truth, by justice and by peace.’

The choir returned to rehearsals on Tuesday 11th January with an encouraging number coming along to sing in person, plus a few newbies – Welcome!

As well as reminding members to carry on wearing masks except when actually singing, the seats were set far enough apart to allow for safe distancing. Caroline Lees, our chair, requested that people should, if possible, take a lateral flow test before turning up on the day.

The committee have always felt that we should all do as much as possible to protect each other during these difficult times. Many of us are no longer spring, or even late summer, chickens and I know that the advice and precautions that are put in place for our safety are appreciated and understood.

The choir is like a family and not for nothing are we known as ‘the friendly choir’. We first met on November 9th 2009 and many of the members who came along to the first meeting or joined in the early days are still with us. However, our members do come from the ‘bus pass’ generation and inevitably we have lost some along the way.

Over Christmas we learned of the death of Roger Harvey, who’d been a mainstay of the tenors for many years. He was a lovely and kind man, with a gentle sense of humour and will be much missed. He wrote the words to a special version of ‘Favourite Things’, written to celebrate Musical Director Rufus’ 40th birthday, with its telling final verse:

Though our tempo’s quite atrocious
And some notes are flat
Rufus remembers his favourite things
Community Choir? – that’s that!

The choir has been invited to sing at Roger’s funeral and his family have chosen Al Shlosha – a favourite of the choir, not just for it’s wonderful and uplifting setting, but also for the message it sends.

Roger was the author of this column from May 2015 until 2019. His pieces were always interesting and informative, often with a philosophical tone. When I checked to find out when he wrote the first piece, I discovered that it was on May 19th and was a report of the ‘Come and Sing’ event that the choir had held on16th May.

‘Smiling faces said it all. In just over two hours, the three dozen new singers had joined with an equal number of choir member in learning seven songs in languages ranging from Congolese to Polish, Hebrew and even English. Rhythmic clapping, foot-stamping and comic movement added to the fun.’

By one of those amazing coincidences that come along more often than many would believe, the choir is hosting a further singing together event on the afternoon of Saturday May 7th at Warners End Community Centre. Watch out for more details of this and other events to come.

D.C.C. meets in term times at Grovehill Church of the Resurrection, HP2 6BJ (in the community centre behind Henry Wells Square) from 9.30 a.m. Please do feel free to come along and give us a try. There are no auditions – all voices are welcome, though we are a bit short of lower voices. (We do have two ladies who sing the tenor line.) Our membership is about 100 so you won’t be singing alone.

‘I’ll see you again, Whenever Spring breaks through again…’

‘Things can only get better’!?