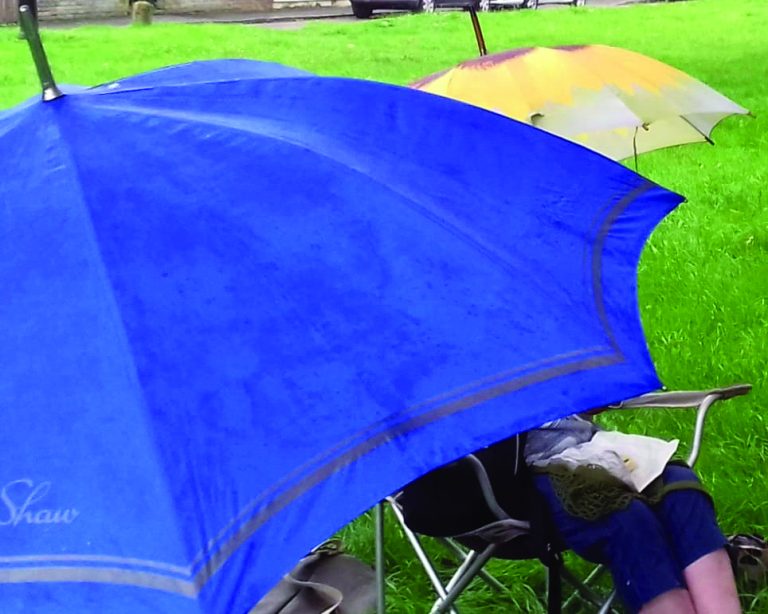 It’s not over yet. The vaccine hasn’t defeated the monster, but the virus is feeling pretty poorly.

From 17th May we’ve been able to meet in larger numbers, up to 30 in parks and gardens and six indoors. We’d been hoping to take advantage of this with outdoor rehearsals replacing the Zoomed ones. As I write the forecast looks unpromising for the first gathering on May 18th but with fingers tightly crossed we’re hoping the weather elves are a bit kinder for the rest of May, and that June does indeed ‘bust out’.

We’ve met in groups outdoors to share a coffee and a gossip. The first one was on May 13th (in hindsight a different date might have made more sense). Five stalwarts gathered at the cafe in Verulamium Park, under a flapping awning in torrential rain. It was fantastic to see each other again; we sat there for two coffees and over two hours. We never stopped chatting and laughing and all agreed it wouldn’t have been half as much fun if it’d been dry! Such fun, that I forgot to take a photo, but here is one from last year of another rainy day picnic in Redbourn.

So what does the future hold for us.
From June 21st, if the roadmap continues to plan, we should be able to meet indoors for in-person rehearsals (see our advert for details) so please do come along and join us. We sing a mix of songs from early music to bang up to date and from Bach to the Beatles and in various languages. The one thing we don’t tackle is the major choral works, so in any one rehearsal we may find ourselves singing six or seven different tunes. Musical Director Rufus Frowde teaches everything by ear, you don’t need to be able to read music. All are welcome, we’re a mixed voice choir and there are no auditions.

In a normal year, we perform at least two major concerts and sing for care homes, clubs and at charity fund-raising events and we firmly believe that ‘singing should be fun’.

We have a couple of extra social events before the end of term in July. A whole choir picnic sometime in June and a Garden Party in July in the beautiful garden of one of our members. Before we regroup in September, we are returning to Ludlow for a singing weekend.

Plans are well under way for next year 2021/2022. More about that in next month’s Boxmoor Direct.

We’ve not met as a whole choir since last May and the excitement is mounting. The monster may still have a sting in his tail, but if everyone acts sensibly and we don’t take liberties, we should at least have him under control.